I have no words for what's happening in the US right now. But I want to say something.

What happened to George Floyd breaks my heart.
And all the other, similar events.

But my words seem useless. What can I do?
I feel powerless.

I feel like anything I say will sound empty. I can't sleep at night for the wheels turning in my head trying to work out how to say ANYthing that doesn't sound like White Privilege apologizing for itself.

How do things like this happen?
What world do we live in where anyone - any living human, law enforcement or not - finds it legitimate to kneel on an unarmed, restrained man until that man is dead? A 20 dollar bill? Really?

But I live on the far side of the planet. Continents away from the protests, from all of the hate crimes, the police brutality, the racism. 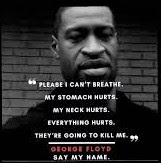 Living in Asia I occasionally feel racism against me, but it's nothing by comparison. Nothing. A bias, a sneer, a degrading look, perhaps hurtful words on social media. Nothing like violence, partly because I live in a generally non-violent country, but partly because of white privilege.

Because living in China and Vietnam, although some people dislike all of us foreigners for living here while belonging to a different country, many of those people will still treat me better than they do my darker-skinned fellow expats. And I don't know what to do about it.

No more AtoZ, no more theme... although I made it through the whole alphabet, so I really need to go get my "survivor" badge soon.

Back to life, back to reality, as we were taught by Soul II Soul.


My language classes did not go away last month, but now I feel an urge to double down a bit. Due to Covid, my Vietnamese classes were switched to Skype. Somehow, not feeling a need to clean the bathrooms and make sure the kitchen is spotless before the teacher arrives makes studying easier. I can focus on the language, and not on the impression I make on my teacher. It's very freeing!

Vietnamese class was this morning, and Mandarin class - also Skype - will be tomorrow morning. {It's usually Mondays, but this weekend was the Labor Day holiday in China, and my teacher cautioned me that she was going out with friends Sunday night and might not be ready for class so early Monday morning. LOL. We understand each other. I told her to have a drink for me.}

I started Mandarin while living in China. When we moved to Vietnam, I wanted to continue, because if I'm living anywhere in this part of the world, Chinese is not a bad language to know. After we got to Vietnam, we realized a majority of tourism here comes from China. (Korea is second.) Many businesses have their signs in Vietnamese, Chinese, and Korean.

Even so, I don't practice my Mandarin regularly. Sometimes - before Covid - I might have heard some people speaking it in a store or restaurant, but I rarely felt compelled to chime in.

At first, I thought Vietnamese was coming more easily to me than Mandarin. They are both tonal languages, and share some grammatical similarities. Even some words are similar. Think of how many English words are recognizable when you learn them in another Latin-based language?

I now consider Vietnamese the harder of the two. Sure, reading Chinese is torture, because if you don't know "that specific" character, you have no idea what it sounds like or means. Vietnamese at least sort of looks familiar. But that's a fools game. It doesn't sound familiar, and I have realized I have no ear for it at all. Tones or not, Vietnamese has 11 vowels! And I cannot hear them all.

Fortunately, my teacher is very flexible. Lately we've been spending most of the lesson on conversation, and practicing speaking and hearing. We are moving very slowly through the book, but in the end, I think I will be better able to function with what I am learning. Little though it is.

Excuse me now. I have to study Vietnamese.
Or maybe I should review my Mandarin, since I have that class tomorrow.
Some days, I miss complaining about my high school German classes.
Posted by Red at 1:01 PM 16 comments:

I understand everyone is in a weird place right now, so no hard feelings. But... a little bit of hard feelings. I'm 8,000 miles away from my family, and I try to reach out, but I don't want to push. The last I actually heard back from a sibling was a brother, 3 weeks ago, and it was a single text.

I called my mom on the 22nd, but that was really to say "Happy Birthday" to my young niece, and the conversation centered on that. Mom is doing the e-schooling for my two nieces while their dad continues working, so that is a very busy house. Conversations are short, understandably.

I was already thinking, after my nephew's death in the fall, that we all seem to be grieving separately, carrying our burdens on our own, without sharing the weight of them among the group. Surely that can't be right. (I know, there is no "right" grief, but it feels like we should hold each other up if possible.) He took his own life, and suicide is hard to talk about, but that makes it feel more important to talk about. Maybe I'm weird.


Then, after my sister's death in January, there was a little more communication. Maybe that had something to do with the fact that her kids bore the brunt of the grief, so there was more of a feeling that we should help?

After Covid came on the scene, at first I was alone over here in Asia and everyone else seemed to think it was nothing. Now that they are in the thick of it, there's less communication than ever before. Zilch.

It's a little lonely, if I'm honest.
I vacillate between a "screw them" and a "love them" attitude.
Overall, the "no man is an island" philosophy seems to be more and more false for me.

It would appear that I am ending this month's challenge on a low note. That's not really how I feel. Just today, we went out to check on the beach - not the popular one, although it is reportedly sparse out there - I needed the sand between my toes and the fresh salt breeze. Glorious! I really do love my life. It would be nice to share more about it with the folks back home. I guess that's my point.