April A to Z is Coming! (pseudo-theme reveal)

I just signed up for this year's A to Z blogging challenge. I didn't do it last year because apparently, the only way to link up was on social media, and I try to keep this anonymous.

It's kind of a spontaneous decision this year, and I might be moving during the middle of it, so here's hoping I survive again!

At first, I thought I'd go themeless, and wing it each day, but I'm too organized! I couldn't help starting to think of subjects for different letters. The subjects had no real correlation: I had some ideas for writing about yoga, or travel - which I write about ALL the time, or maybe books. My favorite potential theme was about Marital Bliss. I've been married 4 years but spent a very long time observing successful or failing relationships before deciding to take the plunge, and I have a LOT to say on this subject.

In the end, I decided the best idea was to include all of the above and just consider my theme to be "Life Wisdom". I don't know how wise it will actually be, but you know, I'll share things that work for me on a variety of aspects of life.

I saw an ad in a social media forum for a job in a marketing position, that called for "female, native English speaker..."

The job sounded right up my alley, from the little information given, so I sent in my resume.

Meanwhile, in the forum, a couple people called out the original poster for discrimination. I mean, there are lots of reasons people need a native English-speaker, and tons of jobs posted with that requirement, but why FEMALE?

This is a very different culture, and after throwing my hat in the ring, I suddenly found myself considering the ad from a negative perspective. The only specific task named was delivering reports to clients. How, exactly, did they expect this new female employee to "deliver reports"? What if this was some sex scam and I'd find myself in a bad situation? Or at least required me to have a certain "pleasing" demeanor? Why female?

~~~
SIDEBAR: This was actually very healthy for me. I wasn't looking for a job, just saw an ad that jumped at me. The process of applying means that now my resume is updated... so when I started considering that the ad might be false or misleading, I decided that "Hey! At the very least, now my resume is 100% up-to-date, so if this job isn't right for me, I can apply elsewhere easily." No stress.
~~~

I had an initial interview yesterday, and the job seems legit, but she couldn't answer all of my questions. In my second interview with the manager, I'll ask about why they required only female applicants.

She did ask my age - a question I breezed over and did not answer - so maybe there is some ageism going on. If they actually look at dates on my resume, they'll have a reasonable estimate of my age.

~~~
SIDEBAR II: She told me she'd set up a second interview, but I've not heard from her yet, so maybe not? Good news is, since - again - I'm not really looking for a job, there's no stress!
Posted by Red at 11:43 AM No comments:

Email ThisBlogThis!Share to TwitterShare to FacebookShare to Pinterest
Labels: work

The Need for Work

I'm not working regularly right now. I love it and hate it.

But I don't have a lot of daily motivation anymore, so that's not good.

I'm trying to convince myself to establish a routine so motivation doesn't matter. ... and this post is me procrastinating.

So now I'm putting into writing my ultimate goal schedule for non-working me:

Wake, yoga, meditate (additional exercise when no morning class)
NO GAMES until afternoon!
At least 1 hour of Mandarin study on class days, 2 hours on non-class days.
Reading and blog-writing on non-class days.
Housework happens when needed, so I don't need to plan it.

So basically, I guess I need to work on reducing my gametime. Baby steps.
Posted by Red at 11:06 AM 4 comments:

Email ThisBlogThis!Share to TwitterShare to FacebookShare to Pinterest
Labels: work

Chinese  New Year is pretty big here, as you can guess.

The. Single. Biggest travel holiday in this HUGE country.

So, we chose to avoid the crowds by traveling early. We went to Taiwan early in February, returning to Beijing before the actual holiday.

Why Taiwan? I tell you, Taiwan won the toss-up because we need new phones that will function on the Chinese system, but purchasing here means they would include, by default, the "Golden Firewall" and block our favorite western apps. So Taiwan was a good choice.

Now, 20-ahem years ago, my family lived in Taipei. I was sent to a high school in the States, so I was only there for the summers, but still, I thought it might be conveniently familiar. BWAHAhahaha.

I was happy to be a tourist.

I'll share the trip in pictures below, but just a few observations:

1. Taipei 20 years ago is where I learned how to cross a city street. "If there's no car coming, cross, wherever you are, regardless of the lights or nearby crosswalks..." This habit has been a great benefit to me here in Beijing. However, in Taipei now, people actually cross with the light, always. It was weird!

2. BUT... crossing with the lights is a necessity, as the traffic moves very fast. In Beijing, traffic is a bit slower. Maybe it's the quantity of vehicles; maybe it's the greater numbers of bikes, scooters, 3-wheeled delivery trucks, etc.

3. Taipei is noisier than Beijing. Beijing is a city of 21-25 million, depending whose stats you read. Taipei is about 3 mil. (New York City is about 9 million, for comparison.) However, the motorcycles and motor scooters here are often electrically powered, and many cars here seem to be flex fuel. It makes sense, because Beijing has developed so much in the last 10-20 years, there aren't many loud, old vehicles!

4. This is not a new observation, but a deeper understanding of what I knew already in high school: Taiwan is clearly separate from the People's Republic of Ch*** in many ways that I can't discuss here, but now that I'm learning Mandarin... I STILL can't read any characters in Taiwan. It is a different written language.

5. The island of Taiwan is bisected by the Tropic of Cancer. This led me to believe we were taking a tropical vacation! It was foggy and rainy most of the time, and only in about the 50s. Still, a lot warmer than where we came from!

Okay. The trip. We spent one day in Taipei, shopping for electronics, and then launched on a 5 day tour of the island. 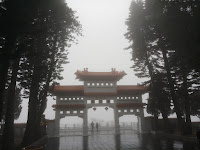 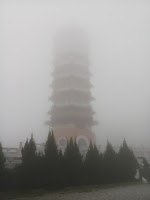 Temple first, then pagoda, about a 25 minute hike away. SO FOGGY!