Quenby made her way to the basement of the apartment building. She took the stairway, not the elevator. Her rubber-soled shoes made no noise to disturb the silence of the night. Every night was silent, now.

In the basement, she passed by the laundry room - one dryer was still humming. Oops. Someone was going to have wrinkled clothes to collect in the morning. They should've started their load earlier.

The locked doors to tenant storage were black holes in a blackened hallway. She didn't even use a penlight to light her way through the cumbersome darkness. It wasn't necessary for someone who knew every step like the body of a long-time lover.

Especially now. The curfews imposed on what population remained made the night quiet.

Quenby was under curfew too, but being out in the silence of the night was a drug. By now she was addicted. Getting caught would be a tragedy. Unforgivable. But she had to go out.

She pressed the basement door open an inch into the dark alley. The darkness was lighter out here with the stars above. Inhaling the cool night air, she smiled and slipped her body out a narrow opening, taping over the latch so she could get back in after her illegal walk.

It was just a walk. She wasn't up to any trouble, just testing herself. How well could she hide in her black clothes, dark hair, dark hat, with her hood pulled up. Could she dodge the patrols? Hide from the few other night-seekers?

Two hours later, having traversed far and wide through the silent, half-vacated city, Quenby returned to the door in the alley. She'd done it again. She'd spotted three other night-seekers, but didn't think they saw her. Two patrols had passed near her, but she'd heard them and found cover in time.

With the elation of success and the sudden loss of the pre-nightwalk adrenaline, Quenby slept well. As usual. Tomorrow night she'd do the same.

Every Friday I write a new flash fiction piece. Today's story was inspired by the below prompt from Writers Write: 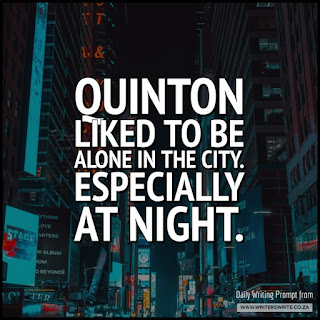 If you have a writing prompt you'd like to see turned into a story, just leave it in a comment.