I've seen posts of this nature for GOT, 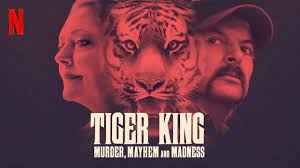 and other shows I can't think of off the top of my head.

It seems like a weird kind of snobbery. Who cares what you don't watch? Sometimes people go online and ask for recommendations of new shows or movies to watch, but I have never seen anyone ask what they shouldn't watch. (Unless they're asking ironically, to bait the trolls.)

It's probably just a sign of the times. Or a sign of the division inherent with a lot of social media. No discussion can follow a blatant "you are a moron for watching this" post. In real life, if I happened to say something about GOT to someone who hadn't watched it, they might very calmly say, "Oh, I haven't seen it." I don't know. It's never happened yet. It's all on social media.

During Covid, Tiger King was all the rage. Popular opinion is that the boredom of lockdowns had a lot to do with its popularity. Brett watched it. Which means it was often on in the same room with me. I watched the first couple episodes, and decided it wasn't my cup of tea. Still, I'd sit down while it was on sometimes. Why all the rage against a TV show? Or against people finding entertainment in true-crime drama? (Because that's what it is.)

I hadn't intended to watch Game of Thrones, either. I knew it was based on an unfinished series of books. (and honestly, the books are really fat and the covers looked boring.) One day a few years ago, Brett and I were talking about what to watch that night, and I said, "I feel like watching something with dragons," to which he said, "Hey! I'm pretty sure that Game of Thrones show has dragons in it!" So we started the series and liked it well enough to keep going.

I am a snob in my own right, but generally I keep it to myself. In my life I have considered myself a coffee snob, a beer snob, and yes, a movie snob.

But I'm older and wiser now. What you think is good coffee is fine, just please don't make me drink it!

I still feel that I'm a beer snob, but I drink a lot of cheap Asian beer anyway.

So basically, with age I've learned the wisdom that everyone is different, and as long as they aren't hurting people, their choices are their own. What someone watches doesn't hurt you, so stop being a snob about it!