A week ago I finished reading an older book that I'd never heard of: 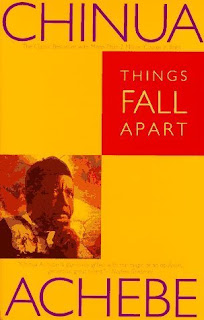 Only today, as I did a search for the cover art, did I learn that it was published in 1958!

It's timeless, because it takes place prior to and during the colonization of Africa. That's as specific as it gets. We know it's in Africa, but not where in Africa. We know that it was a long time ago because of old traditions, lack of technology, and lack of global influence in the characters' lives during the first half of the book.

I don't want to say too much, because I highly recommend reading it. It's banned in some places, or at least it was banned. It's a short, easy read, with a rich story. Especially if you appreciate other cultures. If you don't like reading about lands foreign to you, maybe you wouldn't like it.

That's all I'm willing to say because I don't want to give anything away. To me, it was a fascinating look at a time and place I could never imagine.