Ah, the Joys and Trials of Sisterhood!

(For reference on the who’s who in the pantheon of my family, please review this post -there’s a summary at the bottom, so you don’t have to actually read the whole thing.)

As people get comfortable enough to ask about my move - in less than three weeks! - I’m getting kind of tired of explaining “My dad had a stroke – but he’s fine! – but it made me realize I should live closer to them…” wow, I bored myself just writing that, and that’s not even the whole spiel! I don’t want people to blame my dad for my leaving….  Plus I don’t think he wants the attention. He’s like me: doesn’t like a fuss unless it’s due to his brilliance and/or wit!

So I’ve started adding onto the spiel that I’ll also be closer to my sisters. Particularly Diana, who lives about 3 hours from my parents. If you perused the pantheon above, you know she’s my arch-nemesis. (Is there a difference between a nemesis and an arch-nemesis? Just curious.)
﻿
﻿

I think every girl has that sister. We have learned to get along as adults, but even that only lasts for short periods of time. But, like every girl with "that" sister, don't you dare insult her in front of me - even if I do - or I will quickly enumerate her many graces!

My point is, while I live on the coast, I only see Diana when we are all in the same place for a family event (for example at our parents’ house), all staying under the same roof and eating at the same table. All this intense interaction – as opposed to meeting for dinner occasionally (which we could do if I lived within 3 hours!) – serves only to build the tension and cause her to explode. 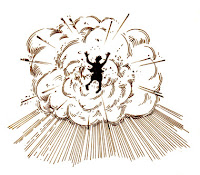 Does anyone else have this sister? I know I am the cause of the explosion, although I have no idea why. Usually nobody else has any idea why, either… which is, frankly, gratifying.

When I move closer, hopefully we will be able to get together for random fun stuff without having to stay under the same roof.

...Because as much as I grate her last nerve, we do have fun up until the point of combustion.


~A couple years ago we took the train into Chicago (She’s on that end of the state) and met with an old friend…had pizza (Gino’s East, of course) and went to the Art Institute, and  did something else I don’t remember. It was good times!

~On the rare occasions that we talk on the phone, we always laugh a lot.

~Staying in a hotel for some big event, she, Hestia and I made mojitos in the hotel bathroom, which was cause for much laughter. (Not the mojitos as much as the making of them.)

~I recently posted something on my FB page, she made a comment (bizarre and innocuous to most people, I’m sure), but I provided the correct reply – because we have the same sense of humor – and the next comment was a friend from college spitting coffee out her nose.

I believe we are too much alike and that’s the cause of our fun and also the cause of the problem. She disagrees. I can't be too much like the lovely and talented Diana. I’m the quirky, nutty one. I'm the little sister who learned early on how to take a joke and who isn't a sore loser.

I love Diana. A couple years ago at Mom & Dad’s all of us girls were in the kitchen baking something, and it called for toasted coconut.

Me: How do you toast coconut?
Diana (raising her glass): To Coconut!
Mom, Dad, Hestia and I: [laughing out loud]
﻿ ﻿
We now always toast coconut at some point during big family meals.

I love the fun I have with Diana. I just wish I didn’t bug her so much. So there's lots of good that can come out of this move.

...but why am I telling you this? To the blogging world, the best part of this move has to do with my finally meeting my internet fiance Brett, and whatever that meeting will lead to! (And yes, we’ve already talked about where, just not a definite “when”)

So okay, I guess I could have written a list of things I'm looking forward to, but when I started that list, this Diana-thing took over.

Today’s Literary Reason to Celebrate (thank you Cranky&Difficult) : The Great Gatsby was published! … in 1925! I do like this book. And I think there’s a movie of the book coming out soon.
Posted by Red at 8:26 PM