I know I’ve been complaining about having to say good-bye so often, and how I’m so non-social that it’s just exhausting to me. I’m sad to say the “Helpmedrainmyliquorcabinet” party was cancelled because I left work that day with a sore throat and didn’t think that partying and making it worse would be a good idea a week before moving.

…but I had already made a pitcher of “knock-you-on-your-a$$” margaritas. So I borrowed a thermos from my officemate, and brought them in to work. …So that we can hang out after work and have a beverage! (Not for lunch - I’m not that much of a lush, geeze!)

However, last night’s “cookout” which turned into an indoor dinner because of the nor-easter that blew through was the best farewell yet.

This friend of mine, who I shall call… I think Terpsichore is the muse of song, so I that works. Anyway, Terpsichore started having occasional dinner parties with a small group of theatre friends and others last summer – or fall…it was after Hurricane Irene which I think was August –  so that’s who this group was. One of the guests – let’s just call him "Buddha" because he’s very zen-like – has a musically gifted son who was there, set up his keyboard and entertained us with live jazz piano! It created a fantastic ambience!

I tried to get video with my phone, but the only one that took is all dark. Apparently for video you can’t change the setting. Weird. 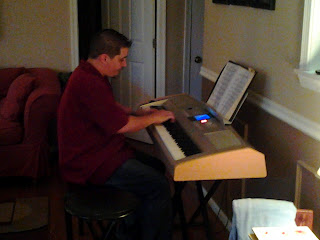 I had brought along a bottle of wine (and was reprimanded for bringing wine to a party in my honor, but I told Terpsichore that I have 4 bottles at home and what does she expect me to do - drink a bottle a night?). A white wine that I had introduced Terpsichore to before, which I remembered she liked. She said she could never remember the name of the wine, so she had me autograph the label and said she was keeping the bottle. Cute. Later, when she poured bubbly to make a toast, she gave me the champagne cork…so I made her autograph it. Now we're even.

Also, I have another RL Secret Squirrel now! (for the story of the Secret Squirrels, click that link) Oddly enough, it’s not the hostess. Since she’s been trying to set me up with a variety of men over the years, and met her husband through an online dating site, I don’t think I could have handled her reaction, positive though it probably would be.

Buddha is a lovely man (married, so don't worry) who’s been cast opposite me several times. We make a good comedy team because he’s short. He comes up to about my shoulder. Think where that puts his eyes. Funny stuff if a director can work it into the action. He’s…oh, probably about 15 or so years older than me. And very protective of me, which seems to be a running theme with older men in my life. Buddha is the guy who took over from me when I walked away from the theatre a month ago (read about it here and in the comments), and he was very concerned that the director had offended me.

He likes to tell me that he doesn’t understand how come I’ve remained single, and blames it on the men in this county, discounting the fact that I am not a fan of the dating game in general. He is by far my greatest admirer. (Well, maybe just my greatest admirer who has actually met me.) We had an interesting conversation last night. (Please keep in mind that he probably thinks of me more highly than most people.)

Buddha: If I prayed, my prayer, or wish, or vision for your future out there [in the Midwest] would be that you would meet a man who could see and love your beauty, but stop and listen to the beautiful person you are and love that person as much.

~~~How could I leave him hanging after sharing this complimentary vision, and not explain what’s happening?~~~

Me: Well, let me share something with you that only two other people in Delaware know.
Buddha: I’m honored.
Me: I’m going to be meeting someone soon after I get to Indiana, who I’ve been talking to for months.
Buddha: (puts his hand to his heart)
Me: We met online, but not through a dating site, and neither of us really expected anything to happen, but, well, we’ll meet soon.
Buddha: (hands together in a “Namaste” movement) I’m so glad to hear it. 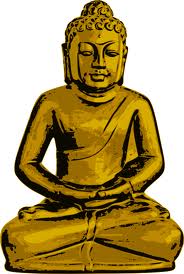 So now there are four Secret Squirrels in my Real Life (plus my father, the Mole), plus all of my blog Secret Squirrels. It suddenly occurred to me that I should not be complaining that Brett’s family doesn’t take me seriously when I’m not even being totally open with everyone in my life about him! So, I’m sorry about that Brett.

I am now down to 4 farewells: Tomorrow night, Thursday at work, Friday at the Symphony, and Sunday after church. Sweet.

~~~
On an entertainingly different note, the Movie Whore may be getting her own avatar. I have several artistic friends and family members and put a call out for an image. We shall see. You know the artistic temperament…or maybe you don’t. Basically I don’t expect quick turn around because they can’t rush their muse.
~~~

And today’s Reason to Celebrate:
It’s St. George’s Day! ...I have no idea what is the standard M.O. for this day.
Catholics, a little help here?
Do we all go out and slay dragons, or what?
Posted by Red at 11:41 PM