The Movie Whore and “Elizabeth” part II…or really, Part I

(please note that, as suggested by Misty I am changing the color of my links.)

A week ago the Movie Whore reviewed “Elizabeth: Age of Reason”. Bozo had provided a list of possible movies to review that are NOT new releases, so that Bozo could participate in the ensuing conversation, but the Movie Whore I the Movie Whore (shut up!) picked up the wrong DVD, only noting that we needed the “Elizabeth” with Cate Blanchett.

We have corrected our mistake. (and “we” are calmly going schizophrenic in the meantime.)

So this is the original Elizabeth (1997?) starring Cate Blanchett and Geoffery Rush.

Once again, the Movie Whore wonders how much is based on fact and how much was Hollywoodized.

Either way, Cate makes a lovely, young Princess Elizabeth. Like with its sequel, there was a heavy emphasis on the romance angle, which really is not the reason I watch a movie, but as the movie neared the end, I could understand the emphasis, since that made her entrance as “the Virgin Queen” more poignant.

A friend of mine - “The Nurse” who you read about here has a total crush on Cate Blanchett. We’ve had fun with that crush, believe me! But the Movie Whore can see the allure. Cate Blanchett brings a warmth and depth to this poor young girl whose half-sister wants her dead, and who is thrust into a leadership role she’s ill-prepared for. It’s hard to believe this is the same person who would later portray Galadriel in the LOTR movies! 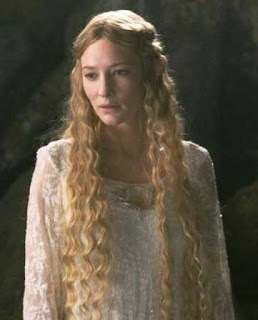 The best example of how deeply the actress is entrenched in the role is when Elizabeth is practicing her speech before appearing to parliament. She’s so clearly distressed and concerned about how to get it exactly right. The actress in me loves that scene.

The Movie Whore got very opinionated about the various men involved:

“Finally! It’s about time she got rid of that tool Sir William. Lord Walsingham is much more subtle, and tactful, and actually looks out for her.”

“Ha! I KNEW that stupid Lord Robert was a bad’un! She was setting herself up for disaster all along. It pays to vet your suitors, queenie! Seriously, if my suitor was flirting with my ladies-in-waiting I’d kick him to the curb!”

“Hey, how did a Sith Lord get in Elizabethan England?” [spoken about the black-robed Daniel Craig character] “That’s pretty awesome."

Overall, The Movie Whore finds the movie Elizabeth to be beautiful and interesting. It’s slow in parts, but maybe that’s because there’s just too much to get it all in gracefully?

And the Movie Whore LOVES the excellent soundtrack.

What’s that music playing when she confronts Lord Robert after all the others were sent to the Tower? I recognize it…is it Beethoven? I can’t quite place it… It flows seamlessly into the music that plays when Elizabeth enters the court and proclaims herself “The Virgin Queen”, married to her country. Finally it got to a point where I can place it: Mozart’s Requiem. Oooh. Chills.

It is no wonder that Bozo loves that scene the most. Music can tell a story that is heard most clearly by the soul. Even the non-musical person can be surprised by their reaction to powerful music. (And classical-style music, more than any, evokes this emotional response.)

So, if you play Mozart’s Requiem, what do you hear?
You hear mourning.
The sounds of sorrow.
Then a dying soul rises above the mourning,
as if trying to elevate itself above the mourners.

You don’t need to understand the Latin of the lyrics to feel the meaning of the music! That mourning? It applies not only to Mozart’s death, but is just as suitable to depict Elizabeth’s “re-virgination” and denial of her true love!

And today's Something to Celebrate:
It's Barbra Streisand's birthday! (70th) Whatever you think of her personal choices, you cannot deny the musical talent that she has!
I think I'll put in Hello Dolly as a movie to pack to tonight, in her honor.
Posted by Red at 11:40 PM