UPDATED X2(photo): If You Met My Family You'd Understand!

In the interest of being a little more open, I’m going to try to input some slightly personal stories into this crazy blog-thing. Don’t worry, they will likely still be nerdy enough to be “me”.

But before I get to the stories, I’d better acquaint you with the cast of characters. (Indulge me in my pantheon.)

Mom and Dad need no explanation. They are who they are, and I am them. All will be made clear.

The sibs. There are four.

The brothers: For the sake of “protecting the not-so-innocent”, let’s call them Zeus and Poseidon. They get along about that well. Zeus is my older brother. He walks on water, but doesn’t every girl’s big brother walk on water? Poseidon is younger than I. He has chosen to disassociate from the family, for reasons that are somewhat vague (which makes me more of a “baby girl” without anyone younger around). My S-I-L, Zeus’ wife – so, Hera? – and I both think that Zeus and Poseidon should be able to get along much better than they do – well, did until Poseidon got his knickers in a twist a few years ago. They are both musical (Zeus as a high school music teacher, Poseidon as a guitar player in a band), they both served in the military in the middle east (Zeus in Desert Storm, Poseidon more recently in Iraq), and they both quote Monty Python ad nauseum, with the accents exactly perfect (Zeus restricts himself to The Holy Grail – he does an amazing sorcerer “Tim”, Poseidon knows more of the sketches).

The sisters: (If I posted pictures of myself here, I would put up the picture of the three of us making mojitos in the hotel bathroom out in Iowa for Grandma’s 100th birthday. We each added it to our facebook pages, and we each – without consulting each other – captioned it with a quotation from Macbeth’s “Three Witches” scenes.) In the continuing Greek pantheon naming-vein, I must refer to my eldest sister as Hestia - goddess of hearth and home - because for as long as I can remember, that’s all she wanted: marriage and family. Hestia and I go for weekly Sunday evening walks, weather and schedules permitting. We each get out our cell phone and she walks her dog while I walk on the beach. My other sister, the Middle Child, shall be known henceforth as Diana, the goddess of the hunt…because she always has me in her sights. After about a day and a half in each other’s presence – two if you’re lucky – Diana will blow her top at me. I don’t know why. Usually nobody knows why and I get a lot of sympathy. I must just grate on her nerves so much that the effort required to get along for two days exhausts all her good will. 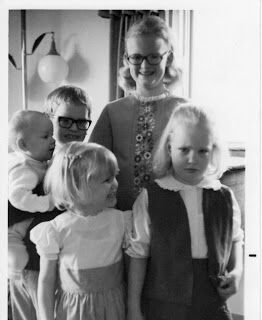 ...See the one with the scowl? That's Diana. See the one grinning in her general direction? That's me. There are multiple photos like this. We are seldom both happy in the same photo. (Since Poseidon is in this one, I must be about 4.)

Are you familiar with this concept? Allow me to enlighten you. Our family has it all: Eldest daughter (Hestia), eldest son (Zeus), middle child (Diana), baby girl (me) and baby boy (Poseidon). I make the gender distinctions because I haven’t met a parent yet that treats their daughters and sons EXACTLY the same. You can’t. We’re different.

Although Hestia is technically older than Zeus, Zeus has always been his own boss. So when Mom and Dad would go out, Hestia was left in charge, but Zeus was left in charge of himself. It was the only way it could work. He got into a lot of trouble, as I recall, but never took anybody down with him. So we have the two eldest being the “responsible” ones. Standard textbook birth-order psychology right there.

I actually do feel sorry for Diana’s situation. Classic birth-order conundrum: She is exactly in between Zeus and myself, but was usually lumped with me and Poseidon in the kids v. grown-up argument, yet given the “you should know better” scolding if we younger three got in trouble. She also was stuck with me tailing her around. Zeus did not have Poseidon tailing him because they are 7-years apart. I now know that I was just trying to emulate Diana – which I could never do because she’s always been a goddess at everything – but all she knew was that I was a pest. Whereas Zeus got himself into trouble on his own, Diana dragged me down with her – because she couldn’t lose me! I was easy to coerce into breaking into Hestia’s room, for instance. (...which is the last such crime I remember. I got a spanking and vowed never to go along with Diana’s schemes again.)

Poseidon usually teamed up with Diana against me. They both admit this. I don’t know if this is birth order psychology, but it certainly helped me learn to get along on my own!

Hestia SOOOO babied Poseidon. Because of the vast age difference, she is holding him on her hip in my 5th birthday photos. Responsible brother Zeus considers baby-bro Poseidon completely spoiled, whereas Poseidon feels abandoned for having to go to boarding school. We all went to boarding school, but Poseidon had a longer time with Mom and Dad to himself while we older sibs were away at school, so I guess when he went to school it was harder for him. I don’t know. For a brief period, when Poseidon and I were both living in the Chicago area as “adults”, we could hang out. I thought we had fun. It really hurts that he’s pulled away from us all, but there you have it: the “god of the sea” is stormy and unpredictable.

Finally, I’m adding to my cast of characters my best friend, who shall be called Aphrodite because she’s the lovingest, givingest person you could ever meet. Anyway, I added her as a “sister” on facebook, so she must be family! It’s important that I give her a name, because especially as I near my moving date, she will certainly figure into this blog with regularity. She’s the one thing – if anything – that has kept me in Delaware as long as I’ve stayed.

Now that you know the characters, there are several stories that can be told, but you have a voice: Is there any character in the pantheon of my life that you want to know more about? Any relationship? Or does anything I’ve said above pique your interest about…anything? Got a better suggestion for name selection?  Let me know in a comment and I will oblige as best I can.