UPDATED: Having Fun at Work - WHAT? making it happen

I have an under-developed sense of professionalism, I think. I mean, my actual work is very professional; I take notes in meetings; I meet deadlines; I keep open the chains of communication, and all that, but of all the offices and cubicles in my workplace, mine is easily the most entertaining. Allow me to show you!

(Be kind, this is an experiment with putting photos in my blog, without having them settle at the top.)

First, I offer a warning... 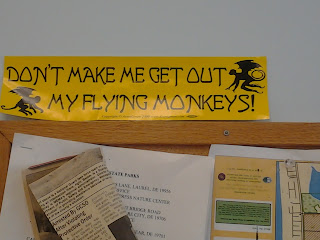 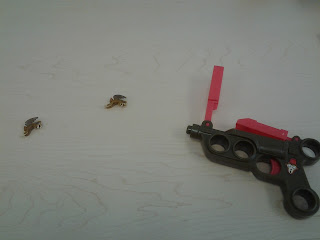 I have a flying Monkey gun! (trebuchet, in fact)
I got a "Chicken-Chucker" (same thing with mini-rubber-chickens) for my officemate. It seemed only fair.

I am the only one in our entire building with any cartoons. I can't think why. 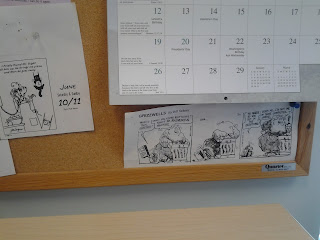 The Maxine says "I finally found Mr. Right. I call him up, he brings me a pizza, and then he goes away."
The other one is a cartoon called Grizzwells. As the two are digging through the trash, the porcupine says "What's this, Gunther?" and the bear says, "Don't you know anything? That's an answering machine." The porcupine mutters "cool..." then says "So where do you put in the questions?" to which Gunther replies "Beats me...I'm not one of those computer geeks..." I love it! Nobody else laughs at it. ...I'm so alone.

Okay, this is just silliness... 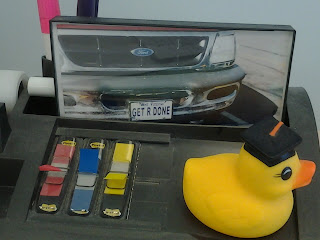 Here's where I hide my tea: 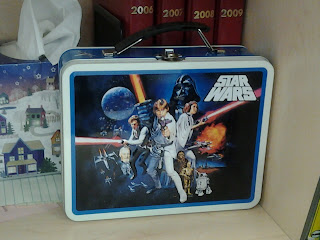 (It was a Christmas gift from a co-worker who GETS IT!)


This is everyone's favorite corner of my desk: 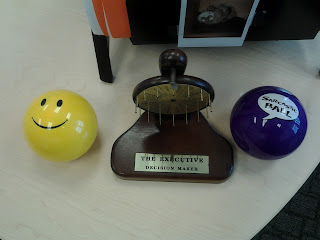 (The yellow is a Daily Affirmation Ball, the purple, a Sarcasm Ball.) 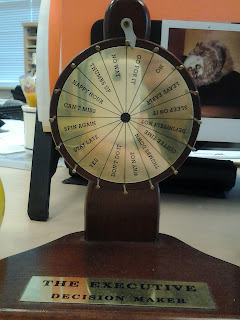 (That's a photo of a baby Osprey behind the decision-maker)
This was a gift from a dear, no-nonsense friend who thinks (thought?) I'm "capricious in my decision-making". Bless her, she thought she'd help me!

Wow. The photos worked! Sort of. I'm terrified to fool with the font above, for fear of deleting the painstakingly downloaded photos. I give a lot of credit to those of you who regularly post photo-heavy blogs - what a time-consumer!

There's other fun stuff like my talking "Brian" - push a button and he says things like "Who's leg do you have to hump to get a dry martini around here?" or "Don't make me beg." Or like the bubbles, and zen-garden which are actually not front-and-center, although the flying monkeys are usually tucked away unless in use. Or my "idiot mug" of a pen-holder, and the Killer-Bunny stapler. But I'm tired of taking pictures, downloading them to the computer, then to the blog. Geez. You guys get a lot of credit!

...and this was a great diversion, and hopefully more fun to read than the blog I was tempted to write, about my stalker, who I've now taken steps by talking to his boss, so that nobody is blind-sided if this continues and I have to go to HR! But I can't write it without sounding like I'm either a martyr or on a soap-box, so I decided to just play. - good idea!

UPDATE:
Just for Misty's benefit (since I can't put the picture in the comments)... 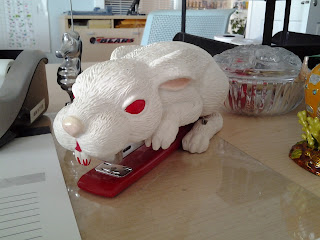 It's from Monty Python and the Quest for the Holy Grail, if you're wondering. I think I got it from the What On Earth catalog. (whatonearthcatalog[dot]com, I think)
Posted by Red at 11:39 PM