H is for Hersheypark

Hidden in central Pennsylvania (PA) is a gem of a city called Hershey. It’s known for its chocolate, but Milton Hershey built many other amenities for his staff and community. One of those was Hersheypark. It started as… a Park (go figure) with a stream, pond, shady trees and picnic areas, trails, at some point a carousel and ferris wheel were added, and the rest, as they say… 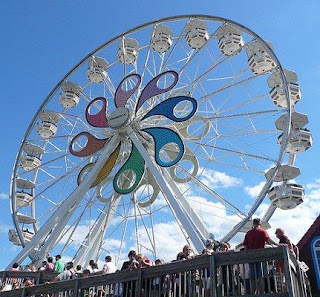 When I knew it, Hersheypark was of Six Flags standard, but nicer. Not just a standard amusement park, Hersheypark simply added into its beautiful natural setting of hills and flowers all the standard rollercoasters – standing, sitting, hanging, wooden, reverse, vertical… you name it. No record-holders for height or distance, but all the thrill necessary.  With lovely, shady walks from one end of the park to another.

﻿
﻿﻿﻿﻿﻿﻿﻿
My rollercoaster buddy and I would spend the entire day, and not all of it was standing in lines! We predominantly rode rollercoasters, maybe occasionally breaking it up with a trip on something tame right after eating, but Hersheypark had so much beauty and variety of entertainment, that our stomachs didn’t reject us!

Yep. For years I was a regular-enough visitor that I had a season pass. Even after I moved down to Delaware I'd come back about 4-5 times a year. Well worth the expense.

Moral of the story: A beautiful setting is more important than record-breaking rollercoasters.