S is for Stonehenge

Brief note/whine: I must admit, I'm struggling to keep up, this far into the alphabet. Oh, I will finish. I will post for every letter. But I feel my posts are getting a little weaker as I go. My best personal pictures have already been used, and let's face it: U-Z are pretty slim pickings for subject matter!
﻿﻿﻿﻿
I could almost cry for running out of words to spend on Stonehenge, because this is one of my deepest obsessions, so being at a loss for words is (haha) unspeakable. Yet, read on for my attempt to describe...

I love visiting my obsessions. First, Loch Ness, when I was a teen. Then, in college, I finally got to Stonehenge - another nerd-like obsession of mine. At least this one's definitely real!
This is LITERALLY the stuff legends are made of. Fiction writers use it as a basis for stories, National Geographic hosted a special where scientists attempted to rebuild the site (in a different location) with wooden structures of the same dimensions as the stones, and replicating the manner in which it was built!﻿﻿﻿﻿ 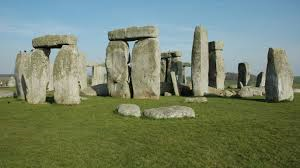 At the time I visited, there was some kind of work being done, and the actual structure was inaccessible due to wire-fencing. You could see it, but not actually walk amongst the stones. I do hope that was temporary... maybe they were putting in a sidewalk around it.
If I could go there every day, I would. This would be my spot to pack a picnic and a book, or notebook to write. I'd photograph it in every light, in every season.
It's so...big.
So old.
So mysterious.
It's freakin' prehistoric! ﻿
﻿

As an American, let me tell you, we know NOTHING about age! While on that day-trip to the Salisbury Plain to look at Stonehenge, we went into Salisbury to visit Salisbury Cathedral, too (built in 1320).
I marveled at the old Tudor buildings, and my English hosts didn't seem to get my amazement.﻿
﻿
Me: How can that building even still be standing? (although, drooping slightly)
Host: What do you mean?
Me: It's so old!
Host: Meh. Not really.


Stonehenge was completed 3500 years ago. Let THAT sink in for a second. What is that Biblically, like, Abraham-era? Maybe more like Joseph? When were the pyramids?
Regardless. I was, and shall remain, in awe of this monument of ancient engineering.
...and I found my words by just gushing.