P is for Perahera

This is a festival, not a place. The Perahera festival in Kandy, Sri Lanka is truly unique. Please bear with me as I recall what I can, as I was in Junior High when we lived there.
﻿﻿﻿﻿﻿﻿﻿
...Also, the parade takes place at night, so the pictures from my cheap camera of the time are kind of bad.

It’s a religious festival, but blends both Hindu and Buddhist elements. Technically, I suppose, it’s a celebration of the various shrines in the city of Kandy – there are many, from both religions.
﻿ ﻿
Kandy is home to a large Buddhist temple, wherein resides the sacred relic of Buddha’s tooth.

﻿﻿﻿﻿﻿﻿﻿ ﻿
During the climactic moment of the huge Perahera parade, on – I believe – the final night of this multi-day festival, the Shrine of the Tooth (most likely a replica) is carried along the parade route on a brilliantly decorated “Tusker” elephant.


(Not all Asian elephants have tusks. I’m not sure what the criteria are for one to become a Tusker, but he certainly has grand tusks!) 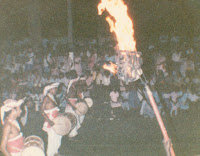 The parade begins at sunset, with drums.
Lots of drums.
Not like a marching band drum-line, but tribal drums.
Individual drums, each carried by its own drummer.

I think the drummers were also interspersed between the other elements of the parade, like marching bands break up the floats in an American parade.
Only instead of floats there were more daring elements. 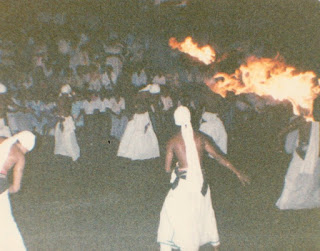 And religious leaders instead of "Grand Marshals".

One part that freaked me out were the religious-devout (Hindu, I think) dancing through the street with hooks in their back, that another person was tugging on via cords. I believe that they are in some kind of a trance when they do that. But don't quote me.
﻿ ﻿﻿

Moral of the Story: Go watch a parade once in a while - you never know what you may see!
Posted by Red at 7:00 PM